No airline ever wants to puts its crisis communications training procedures into practice, but over the last few days the Malaysia Airlines team have done an excellent job in communicating to a global audience what little information they have, in very difficult circumstances. Boeing have also followed their textbook procedures – so soon after the Asiana crash too.

At the time of writing MH370 is still missing. Clearly the airlines and investigators are prioritising finding the plane over communications. Events are still unfolding, and thoughts are with those affected, but the extremely professional approach of the airline instills significantly more confidence than, say, the much-criticised delayed response by Asiana recently.

In any crisis, speculation will fill a information vacuum. And this one has been no different. But what is different is that there has been very little ‘solid’ information since MH370 went missing on 8 March. But still Malaysia Airlines appear to be authoritative and in control.

Malaysia Airlines’ social channels – and once it was up and running their dark site  – is a textbook case in how to use modern communications channels effectively.

Malaysia Airlines’ first statement was released at 7.24am local time on Saturday 8 March on Facebook (possibly before the dark site was ready?) and linked to via Twitter, clarifying that the plane was missing since 2.40am (local time) and detailing the numbers of passengers, infants and crew. 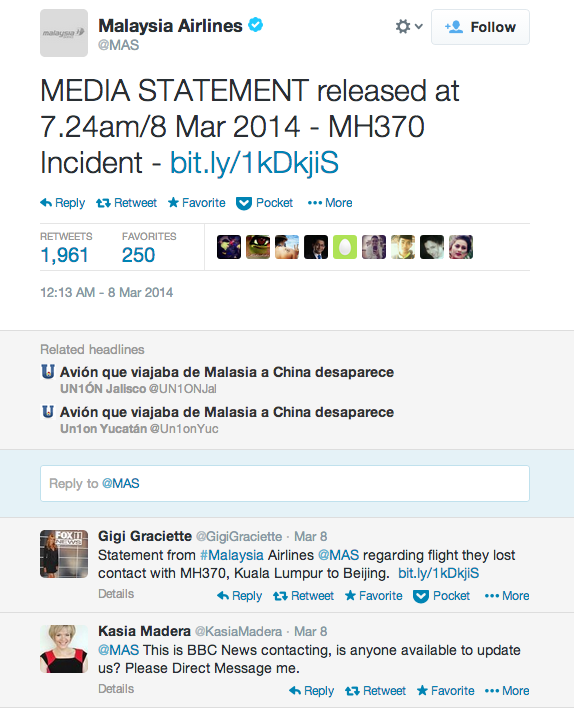 N.b. Someone from the BBC was the second person to get in touch

Within two hours the CEO had issued another statement on Facebook and the airline was contacting next of kin. 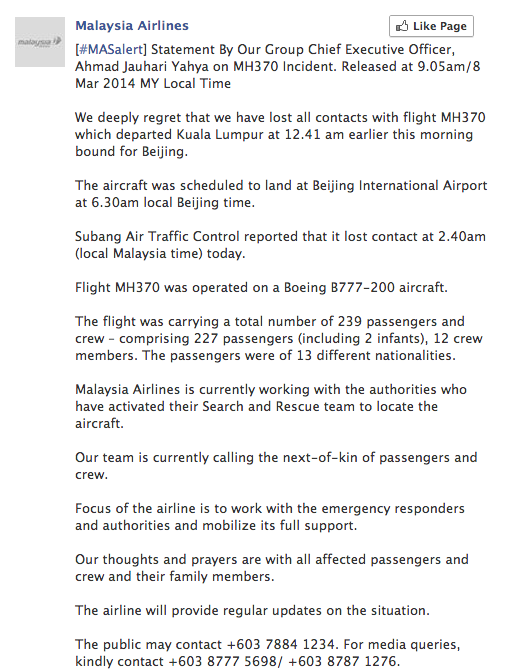 At 11am the press conference and CEO statement (also published on Facebook, not yet on the dark site) dealt with speculation that the plane had landing at Nanming, detailed the nationalities of the passengers, and spelled out the extensive experience of the Pilot and First Officer.

From 2.30pm all the social posts were headlines only – and referred people to a ‘dark site’ (a blog-type platform on a corporate website that only gets switched on during a crisis) via a regularly shared shortlink – www.bit.ly/MH370updates.

The homepage of the dark site always features the latest information, clearly dated and in order. From this point all company information was  posted once, on ‘owned’ space, and links were shared via social channels.

(As an aside, both the dark site and the social channels pages appear to have ‘greyed out’ the colours in the corporate logo – a small but significant detail).

At the time of writing, Boeing also seem to have suspended ‘news as usual’ on their corporate pages as well, instead, defaulting the home page to a “Deepest concern” statement, as it did post-Asiana.

Against this backdrop, and, given the lack of ‘news’ there is a lot of speculation, often in ‘reputable’ news organisations like Fox News, which Malaysia Airlines are not commenting specifically on. The airline has also (wisely) not been pulled into any of the discussions about the passengers with the alleged false passports.

Surprisingly perhaps, some of the Reddit threads, even the very early ones, have been extremely well-informed. Someone claiming to be a 777 pilot debunked a few myths, while someone else shared the link from Flightradar which showed the flight disappearing from the global tracking system. Genuinely very eerie.

News reports depict the family and friends of the passengers and crew being very upset about the lack of information available. As you’d expect them to be.

But given the lack of information to date, Malaysia Airlines and Boeing have shown how effectively crisis communications can be done, up until now.

How well they’ll do when there is information about what has happened to MH370 remains to be seen.